For the month of April we learned about Passover.  We began with the story of Moses and some of the terrible things that happened to the Egyptians.  The children also learned about the traditions of the seder and compared regular days with Passover days.

There were many art projects that were incorporated with the Passover holiday.  First, the children made a Passover Haggadah with pictures.  The Tziporim class also made paper matzah and painted it with a fork, colored frogs and a red river with paint and markers, and decorated Jerusalem with colorful tissue paper.  Finally, the children made a Haggadah book with 4 cups and rolled paint over the stencils.

In preparation for Passover, the children also learned a few Hebrew words; such as seder, Haggadah, Matzah, and Afikoman.

To go with all the other activities the children were doing for Passover, they studied a few books.  The first book was “Let’s Celebrate Passover” by Lissa Schreine, followed by “Let’s Have a Seder” written by Madeline Wickler.  They also enjoyed reading “My First Seder” by J. Groner and M. Wickler and “I Have Four Questions” by Chari Radin.  The last story they enjoyed was written by Julie Auerbach.  The book’s title is “Everything Changing, It’s Pesach”.

In preparation for the Passover Sing-A-Long, the children learned some Passover songs.  They learned “Song of the Hebrew Slaves”, “Where is Baby Moses”, and a Passover classic, “Frogs”. 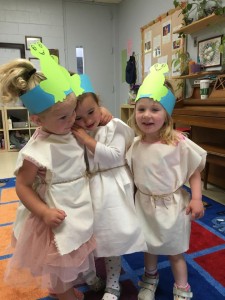 Finally, the children enjoyed making and eating Matzah pizza with cream cheese and Matzah.  It was a productive Passover month in April.